Do you ever get nostalgic? Do you ever think back to a previous time? A time with fond memories. Simpler times. A period where everything wasn’t so loud. So complex. Sorry if we sound melancholic. It’s just sometimes we can’t help but to reminisce about what used to be. When slots were analogue, and they were called one-armed bandits. When all you had to do was match a few cherries along a single payline to win.

And clearly, someone at the power-house slot developer NetEnt has had the same thoughts. Although the 5-reel game is a lot more modern than its analogue predecessors, it clearly draws inspiration from one-armed bandits.

Twin Spin offers 5 reels, 3 rows and 243 ways to win. The slot has one single bonus feature, which is quite remarkable for such a popular title. Read on to learn how Twin Spin bridges the gap between old-school fun and modern slot technology.

You can usually count on NetEnt to deliver excellent design and soundtracks, and Twin Spin is no exception. The visuals are slick, and the soundtrack is funky; think a jazzed up version of a classic slot. The symbols in this slot consists of classic slot symbols like A to 9, cherries, bells, BARs, diamonds and 7s. In other words, very old-school stuff. 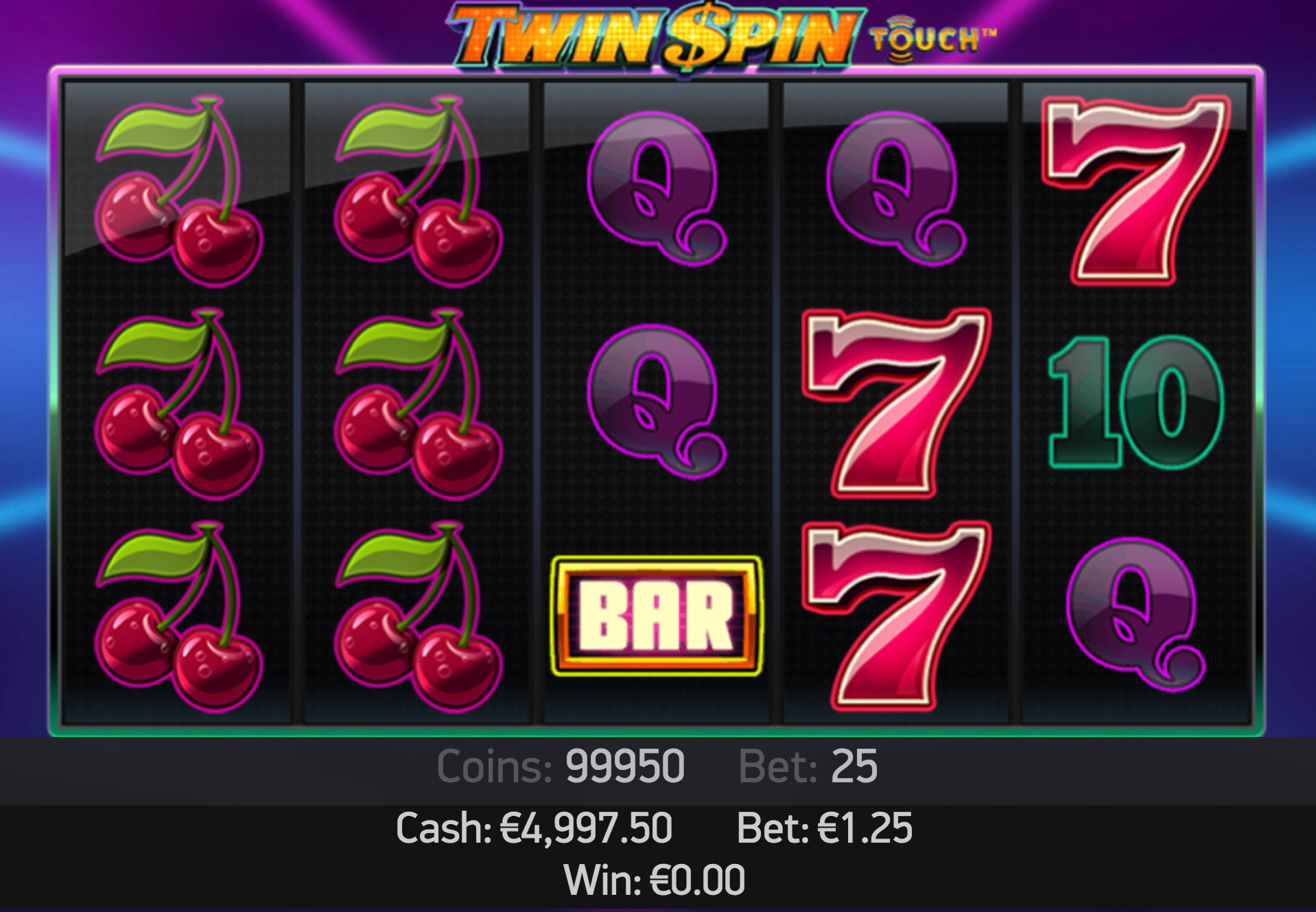 There is not much more to the design than that. The name of the slot is placed above the reels, which are flanked with a reminder of the 243 ways to win. All the game controls are conveniently found underneath the reels, where you also can see your current bet and coin level.

Twin Spin plays like most mechanical slots, with one key difference. The goal is to match 3 or more symbols along a payline starting with the leftmost reel. The more symbols you match, the better. There is also a Wild symbol that can land on the 3 middle reels and will substitute for all other symbols to help create winning combinations.

But what sets Twin Spin apart from the old, mechanical slots is the titular feature. The Twin Spin feature choses adjacent 2 symbols at random before each spin. Two adjacent reels will then spin featuring only that one symbol. It is also possible for the Twin Spin feature to expand and cover 3, 4, or even all 5 reels in this slot. If you get a high-paying symbol synchronised over all 5 reels, you can expect some enjoyable returns. 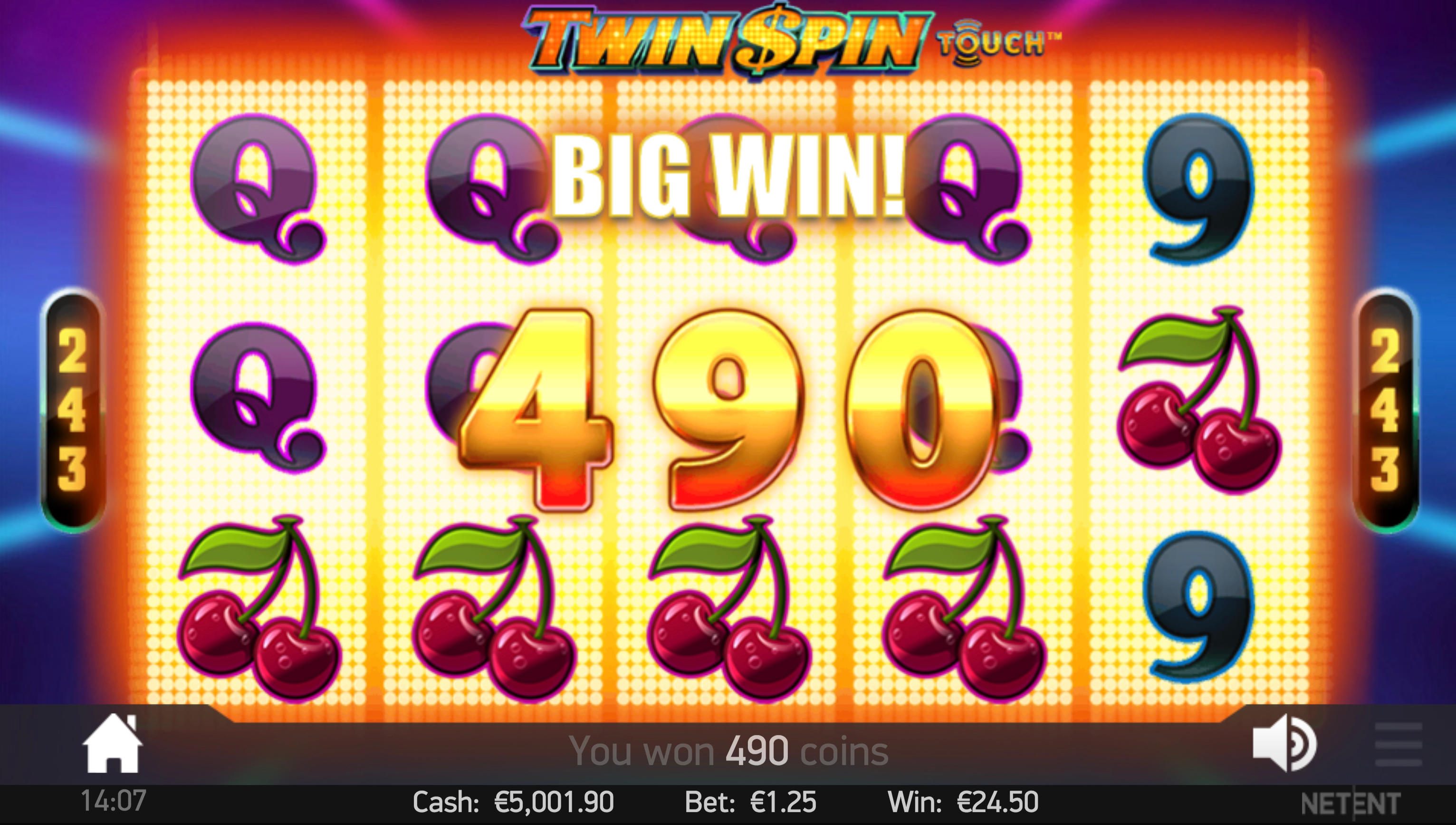 That is all there is to this slot. Twin Spin does not offer any free spins or bonus rounds. What you see is what you get. The sequel Twin Spin: Deluxe provides the same concept on a bigger scale. In the 6-reel, 5-row follow-up you need to match symbols in clusters to win up to 10 000x your stake.

Twin Spin has a medium to high volatility. When playing this slot, you might endure long streaks of misses and near wins. On the other hand, you might secure some hefty gains if you get a valuable symbol selected to appear on 2 or more reels.

If you plan to play Twin Spin for a while, we suggest you bring a proper bankroll and a fair bit of patience. If more frequent, albeit smaller, wins is more your thing, we recommend a slot like Starburst, another classic NetEnt slot. The game utilises Sticky Wild and has been a big fan favourite since its release in 2012.

NetEnt is among the industry-leaders when it comes to the mobile gaming experience. With NetEnt Touch you are always ensured the same exceptional slot experience regardless on your device. The graphics in Twin Spin looks just as crisp on mobile, and the game controls are all included cleverly so you have full access to all options.

The game can be played across all modern devices and operating system, and you get the same elegant fruit machine regardless of your screen size.

Ever since its release in 2013 Twin Spin ahs been a fan favourite. We would’ve guessed that the slot was too simple for the modern casino player, but it has found a broad audience online. The concept of a funky and simple slot clearly inspired by old-school fruit machines has clearly struck a chord.

We love the design of Twin Spin, and we’re big fans of the slot’s simplicity. We would, however, have liked to see at least one more feature. On the one hand, we like that the Twin Spin feature activates on every spin. The feature looks good, and the excitement rises when you are lucky enough to get 4, or maybe 5, synchronised reels. On the other hand, you know what to expect on every spin, and it all becomes a bit too predictable in the long run.

But there’s a lot to be said in favour of the predictable and well-known, and that is probably one of the reasons why this is a NetEnt classic more than 6 years after the release. We never complained that the classic fruit machines, upon which this game draws inspiration, was too boring. It might be said that we are becoming very spoiled with all the special features in modern casino games.

Another small complaint concerns the volatility. We usually don’t mind spinning for a while without winning if there is the allure of a huge win. And 1080x your stake is by no means a small maximum win; we just wish either the (smaller) wins would come more regularly or that the top prize was bigger.

At the end of the day, this is all nit-picking. Twin Spin sets out to be a modern twist on a classic machine, and it more than succeeds in doing so. The graphics are brilliant, the soundtrack the same, and the Twin Spin feature keeps us entertained (at least in the short term).

Play Twin Spin, and hundreds of other slots and Live Casino games, at Wildz Casino. Just log in (New player? Register here) and find the game in our ever-growing game selection.