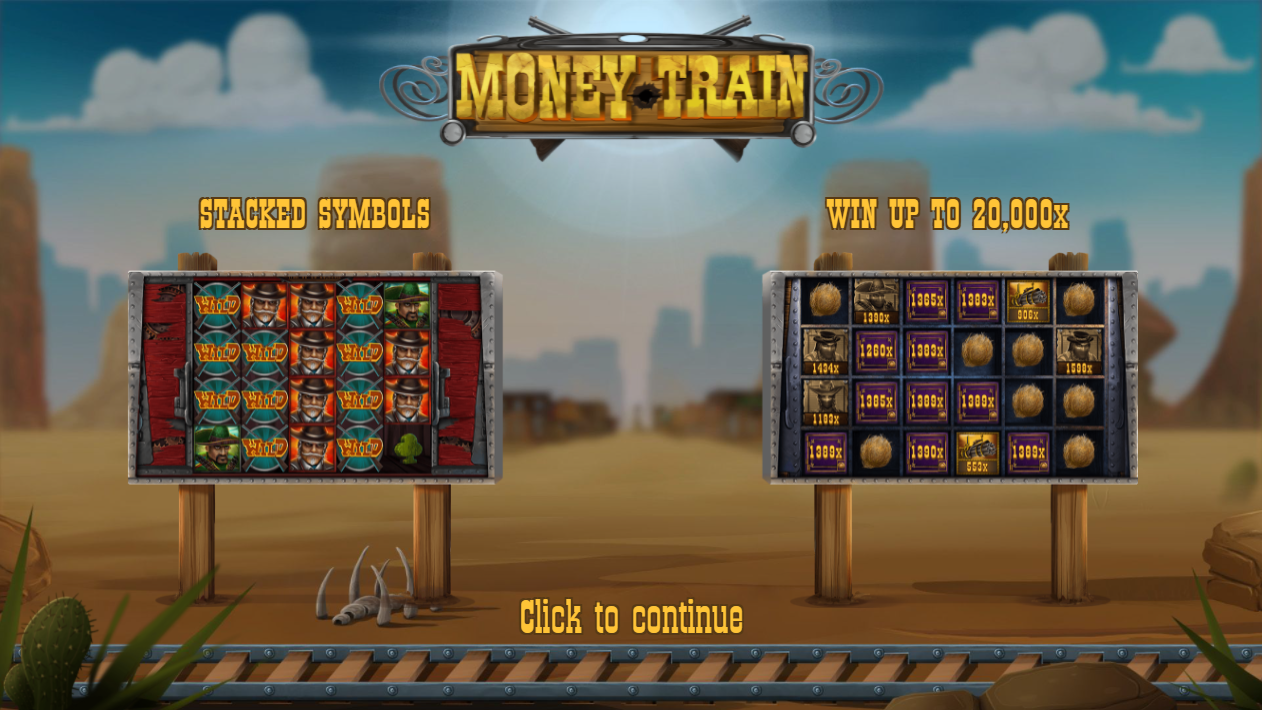 Powered by the talented folk over at Relax Gaming, Money Train is a phenomenally popular Wild West-inspired slot played across 5 reels and 40 paylines.

Since bursting onto the scene in 2019, the game has gone on to become a true heavyweight of the online casino world, owing to its classic theme, high visual production and above all, its explosive Free Spins round.

Money Train consistently ranks as one of the most frequently played slots not only at Wildz, but across the entire online casino industry as a whole.

Find out just why on this page.

Every aspect of the game’s design has been executed with painstaking precision, from the classic Wild West backdrop, down to the graffiti adorning the carriage and intricate game symbols.

The action takes place inside the carriage of a rickety steam train that has just rolled into town, with an idyllic blue sky to the distance.

Layered on top is a gripping soundtrack that syncs perfectly with the theme and helps ratchet up the tension every time you spin the reels. It culminates in a highly enjoyable, absorbing gaming experience.

As to the paytable, there are playing card icons encompassing all four suits that each possess varying values, along with the more premium symbol set comprising a selection of shady-looking outlaws.

Here’s what you can expect for landing five of a particular kind in any given spin from highest to lowest paying, relative to your wager:

On top of the regular paytable, a new set of symbols pops up in the bonus round carrying their own unique modifiers to enhance your prospects further, which we’ll cover in more detail below.

In typical slot fashion, wins occur in Money Train when at least 3 identical symbols align across one of the 40 paylines in play beginning at reel #1.

The Wild is represented by a pair of shotguns, which serve their usual duty to step in for all other regular symbols bar the Scatter. 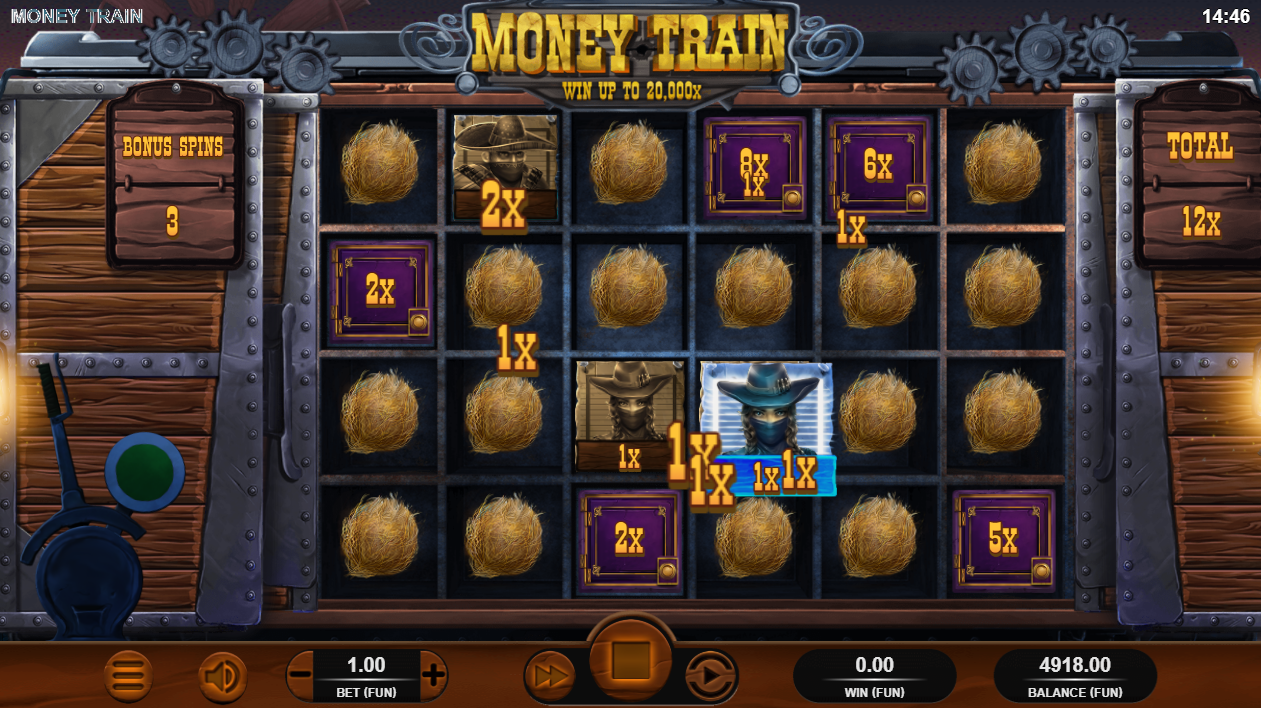 Needless to say, Money Train is all about its high-risk, high-reward Free Spins round that promises payouts scaling as high as 20,000x your wager.

Unlocking the bonus feature is possible by landing 3 Scatters simultaneously on reel #1, reel #3 and reel #5.

Once the feature is activated, the player is whisked to a separate screen where the three triggering symbols all reveal a separate cash value, followed by 3 Free Spins.

The Money Cart bonus also brings 6 brand new symbols into the equation, complete with modifiers of their own:

For a shot at the more lucrative prizes, you’ll want to land the Widener, which brings another reel into play for more win opportunities on each subsequent spin.

Beginning with 3 spins, each time you manage to land a special symbol your tally resets back to this number. The round terminates once all lives are exhausted and your overall winnings are duly tallied up.

What’s more, for anyone short of time - or patience, Relax Gaming have bolted on a Bonus Buy feature which grants you instant access to the Free Spins round. Doing so comes at a cost of 80x your wager.

In May 2021 Money Train was selected to become the exclusive game for the Wildz Spinback bonus.

Spinback awards players a second chance free spin should they encounter a string of winless rounds on either John Hunter and the Tomb of the Scarab Queen or Sweet Bonanza - both by Pragmatic Play.

Once you’ve amassed five Spinback free spins in ‘My Account’, take this to Money Train and begin preparing your train heist!

Wildz players can head off to the Wild West on any device, with the game optimised perfectly for flawless mobile play.

Players can expect the same high-end visuals and pulsating gameplay no matter which device they prefer.

Money Train ranks high on the volatility index - so it’s one more suited to players who are able to withstand the inherent swings in high-risk, high-reward games.

Should the game’s bonus round kick into high gear, and the wait can certainly be worth it, with rewards worth up to 20,000x in the offing for the most patient gamblers.

As a high variance title, don’t be surprised to encounter some prolonged barren spells in your hunt for the biggest wins, though.

RTP-wise, a score of 96.2% plants Money Train squarely in the mid-range for most modern online slots, representing fair value for money in the long term.

The slot’s unconventional bonus round alone is enough to warrant a 5* review from Wildz, packing a 20,000x max win to boot.

Add in brilliant graphics, some toe-tapping music and engaging play, and you have all the ingredients of a truly exceptional online slot from a developer of the very highest pedigree.

We can’t wait to see what Relax Gaming serve up in the highly anticipated third instalment in the series, Money Train 3!

Wildz Casino houses a host of epic Wild West games. If you like Money Train, you should try the impressive sequel, Money Train 2. Relax Gaming’s follow-up expertly retains many of the original features while cranking up potential to previously unchartered heights at 50,000x your bet.

Can I play Money Train on Samsung?

Yes, Money Train, along with all online slots in the Wildz catalogue, are configured for perfect handheld gaming.

What is the RTP for Money Train?