What’s the one thing we know about the Vikings? That they were a pretty wild bunch. They plundered, were violent and generally wreaked havoc wherever they went. And wild they went, in Yggdrasil’s immensely popular online slot Vikings Go Wild. 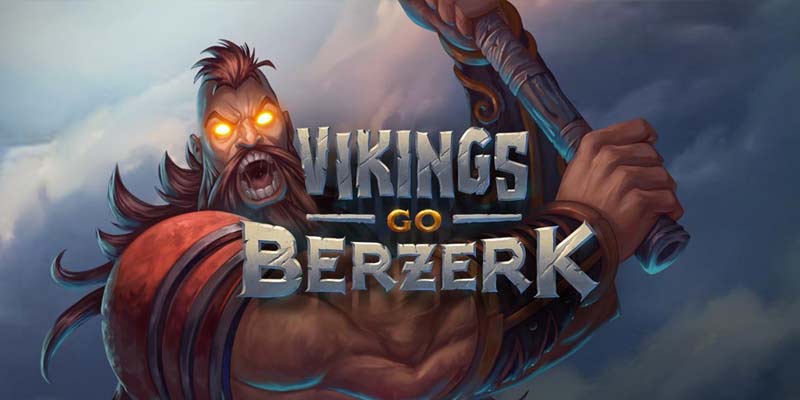 But if history, and various movies and TV shows, are to be believed, the Vikings didn’t just go wild. They went berserk. They were hardcore badboys that destroyed anything in their way. And so, Yggdrasil brought back the gang for another Norse themed slot.

Vikings Go Berzerk is a 5-reel, 4-row, 25-payline video slot from Yggdrasil with plenty of exciting bonus features and great graphics. Read on if you want to learn more about how these Vikings Go Berzerk–and how it can benefit you.

The game opens with a brief, cinematic intro where a moment of carnage seems to have turned a bunch of violent Vikings into stone. Once the intro sequence is finished, the reels are revealed. They are placed on top of a classic, wooden Viking Ship, in the shape of a dragon with a metallic figurehead. Under the reels, you’ll find the game controls readily available, and the four main Vikings of the slot, each with their own meter.

These four animated Vikings, looking like they could come straight out of the TV show Vikings, also acts as symbols on the reels. The other symbols are made up of iron, gold, silver and bronze coin with (presumably) Norse inscriptions. Also, there is a Free Spins symbol, a brown treasure chest full of sparkling gold and a Wild symbol. Even though the symbols have colours, the overall design of the slot is dark. This is in line with the berzerk and rage theme, which we’ll come back to in a bit.

The main objective of Vikings Go Berzerk is to match between 3 and 5 symbols along one of the game’s 25 fixed paylines. The slot pays from left to right, starting with the leftmost reel. 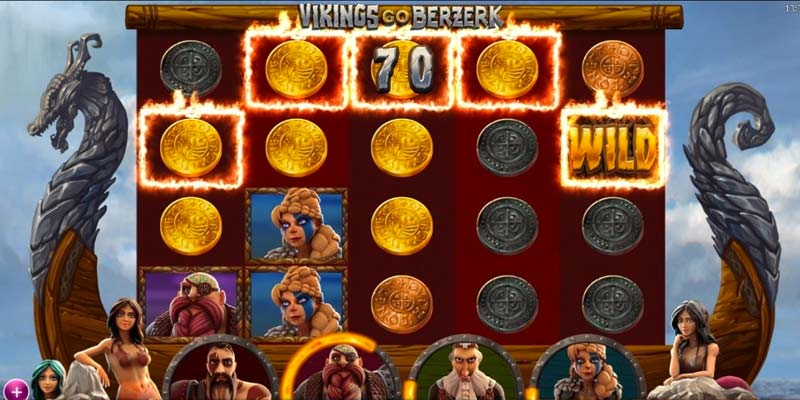 This is how the various symbols pay:

Each time you land one of the Vikings on the reels, Rage points is added to the meter of the Viking in question. The bigger the win, the more Rage is added. When a Viking’s meter is filled, that Viking will be in Berzerk mode while 7 Free Spins is triggered.

Viking symbols can also engage in battle against the Siren that is represented on the Free Spins Symbol. If the Viking is victorious in this battle, he or she will transform into Sticky Wilds and stay on the reels for the remainder of the bonus round.

Before Free Spins begins, one of the following boosters will be awarded at random:

If you trigger the Free Spins bonus by filling up a Viking’s Rage meter, you are awarded 7 Free Spins with said Viking in Berzerk mode. What is Berzerk mode, you might ask? It means that the Viking is guaranteed to win every battle against the Siren, ensuring a Sticky Wild every time it lands. You only receive 7 free rounds, but the chances of landing a big number of Sticky Wilds is very good.

One of the best things about the Rage meter is that the game will automatically save your progress. That means that you can come back and pick up where you left of with filling the Rage meter. In all honesty, it takes quite a while to fill a whole Rage meter, so this is a welcome touch.

When playing Vikings Go Berzerk, you will notice different kinds of treasure chests on the reels. This is what you can expect from these chests:

When playing Vikings Go Berzerk you can expect a fairly regular flow of wins, but the average size might be on the lower end of the scale. That is not to say you can’t win big, because you most definitely can with all the juicy bonus features.

As a rule of thumb, you can expect a steady flow of smaller wins in the base game, while the big wins are found in the Free Spins rounds or the Treasure Chests.

Yggdrasil are not just among the best slot developers around; they also have a reputation for delivering first-class mobile slots. Vikings Go Berzerk is no exception, and you can play the slot on most modern devices and operating systems. The graphics look gorgeous on mobile phones, and all the game controls are readily available for your convenience.

Vikings Goes Wild was a big hit, so there’s no wonder Yggdrasil made a sequel. The follow-up continues where the first title left of, and the result is enjoyable.

The feature-packed slot entertains already from the intro sequence, and the animations are well executed and serve the slot well. Reading about all the features you might think it’s a complicated game, but you quickly realise it isn’t.

We enjoy the Free Spins round with the random bonus feature, but we’d also love to either have the Berzerk mode active here–or to have more initial Free Spins awarded for the Berzerk free spins. Maybe we’re just greedy here. All we really want is a bunch of Free Spins with guaranteed Sticky Wilds; is that too much to ask? At the end of the day, both Free Spin rounds are highly entertaining and potentially rewarding.

As expected, the slot was a massive hit, so Yggdrasil developed a third instalment: Vikings Go to Hell. If that title doesn’t pique your interest, we’re not quite sure what will. It’s as absurdly entertaining as Vikings Goes Berzerk, and we recommend you give it a spin after this one.

Ready to Go Berzerk? Log in at Wildz.com (New players can register here) to play Vikings Go Berzerk and hundreds of other popular online slots.