Are you ready to jam? To paraphrase Sophie Ellis-Bextor, “there’s a Jammin Jar on the dance floor”.

Push Gaming invites to a colourful party in Jammin Jars, played on an 8 by 8 grid and with several extra features. With a simple and brightly coloured design, a groovy soundtrack and big multipliers Jammin Jars bring the funk to Wildz Casino. Read on to learn more about the juicy game.

Jammin Jars is played on an 8 by 8 grid set on a dance floor. The disco party is in full effect, as illustrated by the bright lights and a big disco ball. If the visuals aren’t enough to get you in a party mood, the 70’s music surely is.

The game symbols make up a rather colourful fruit and berries basket: blueberries, plums, apples, raspberries, oranges and strawberries. The symbol design resembles NetEnt’s BerryBurst, but the similarities stops there.

The game’s Wild symbol is a colourful jar filled with layered fruit. Frankly, it looks like something you would pay way too much for at a hip bar in Shoreditch, London. The colourful slot has a bright and lively design, and the slot really comes to life when one of the bonus features is activated. More on that in a bit.

Played on an 8x8 grid, Jammin Jars makes use collapsing symbols, also known as cluster wins. To form a win, you need to match 5 or more adjacent symbols. You don’t need to match the symbols in any particular pattern, as long as they are all connected on the grid. Matching five symbols shouldn’t be too much of a problem given the 8x8 playing area.

When you have matched a winning cluster, the game’s Cascading Wins comes into play. The winning symbols are removed from the grid and replaced by new ones. The respins, or refalls, will continue for as long as you land new winning clusters on the grid.

The previously mentioned colourful jar, the game’s Wild symbol, has a nifty bonus attribute. When it lands on the grid, it works as a regular Wild, substituting for all other symbols to create winning combinations.

If it doesn’t contribute to a win, it will disappear before the next spin. But after every win that makes use of the Wild, it moves to an adjacent and empty spot for the subsequent cascade. It also has a multiplier attached to it, which will increase with one for every win associated with the jar. So what you actually get here is a Sticky Wild with a win multiplier.

This versatile and rainbow-coloured jar does not only act as a helpful Wild. It also works as a Scatter symbol, and if you land 3 or more of these in the same cascading sequence, you activate the Free Spins round.

If you trigger the Free Spins round, you are awarded six free spins. This is a low number, but all the jars that triggered the round remain on the screen. The multiplier will increase every time the wilds are part of a winning combination. If any more colourful Wild jars land on the grid during the bonus round, they will remain on the screen for the entire duration of the round. The jars will keep moving to the next vacant and adjacent grid position.

With so many symbol positions on the grid, the chances of landing new jars are good. The fact that these are sticky wilds with win multipliers somewhat compensates for the low number of free spins in our opinion. You also need to factor in that the cascading respins ensures that the total number of free spins will total more than 6.

Jammin Jars has one other feature, which triggers randomly in the base game. You might see it coming by a change in music and lightning. The Rainbow feature will take the colour explosion in this slot to the next level. A rainbow will show up and cover the entire grid. It will then drop between 1 and 3 gigantic fruit symbols onto the grid to help form winning clusters. 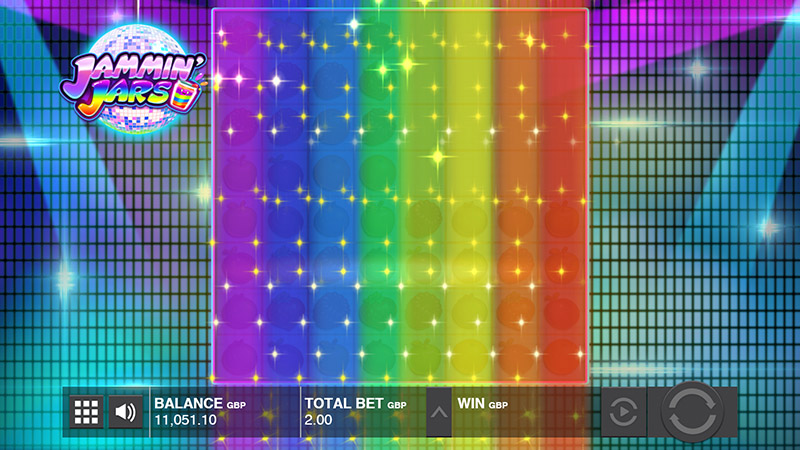 These massive symbols can take the shape of 2x2, 3x3 or even 4x4. While the Wild symbol cannot appear as a massive symbol, it will add to the cluster if it lands next to one of the extra large fruits or berries.

Part of the reason why Jammin Jars has grown to be such a fan-favourite is the slot’s very high volatility. You might endure long streaks without much returns in this online slot. But when you do win, the win potential is tremendous.

This is made possible by the unlimited win multiplier that follows the rainbow-coloured Wild symbols. The maximum win in Jammin Jars is 20 000x your bet. Yes, twenty thousand times. The trade-off for such an unbelievable number is the possibility of long winless streaks. But with a max win like that, it doesn’t seem to bother slot players online.

Playable across all modern devices and operating systems, Jammin Jars looks excellent on mobile. The colourful design and funky soundtrack almost makes us wonder if it was developed to mimic a mobile game. Whatever the intention was, the slot makes for a great game on the go.

Jammin Jars has quickly developed into a favourite slot for many players, and it’s easy to see why. Push Gaming has managed to put combine a fresh design and a funky soundtrack with the potential to win big. The game proves that you don’t necessarily need a ton of features if the ones you have are good. And the Sticky Wild with an unlimited win multiplier falls under the category good. With a little bit of luck and a good dose of patience, you can potentially win 20 000 times your stake in Jammin Jars.

Push Gaming ensures that you don’t end up spinning and spinning for an eternity, hoping to hit that one sweet combination. The randomly triggered Rainbow feature makes sure you can land a hefty return while you try to secure those coveted wilds with multipliers attached.

Ready to jam along and win big? Play Jammin Jars and hundreds of other popular online slots at Wildz Casino. Log in to your Wildz.com account (New player? Register here) and search for the game to join the party.