Push Gaming has quietly been making a name for themselves over the last few years. Jammin’ Jars regularly features on our list of most popular online slots. And with other smash hits like Tiki Tumble, Fat Rabbit and The Shadow Order the slot provider has gained a loyal following online. One of the company’s latest, and already most popular, slots is Razor Shark.

In Razor Shark we’re taken on an underwater adventure. The slot might look like Finding Nemo, but it has bite like Jaws. Read on to learn more about the game and why it has become such a hit with players at Wildz Casino. 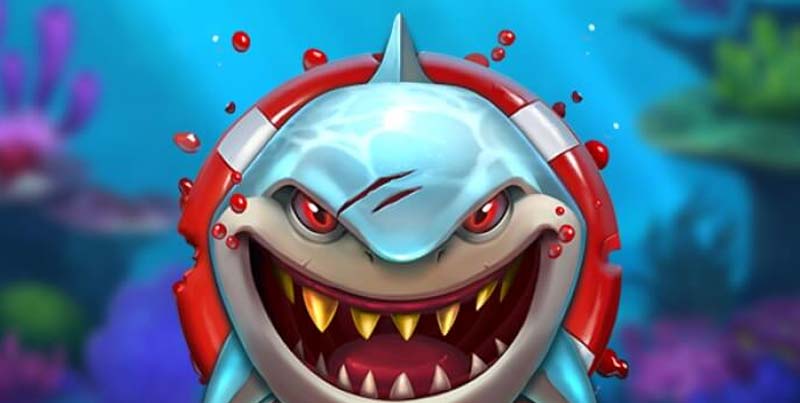 Finding Nemo was mentioned in this article. That’s because Push Gaming has opted for a colourful and cartoonish design for the slot. We’ll admit that the main shark looks like he has some bite in him, and his eyes are slightly terrifying, but the overall design is still more jolly than scary.

The game takes place underwater, just under the surface of what looks to be an idyllic beach. The thought goes to the beach town in Jaws, the Steven Spielberg classic from 1975. The music is thankfully not as luminous in this 5-reel slot with 4 rows. The game also offers 20 fixed paylines.

The game symbols all fit in with the underwater theme. In addition to the seaweed they consist of an underwater camera, flippers, a mask and an oxygen task. Is it safe to assume they all belong to the same unlucky diver, possibly eaten by the high-value shark symbols? One could only speculate. 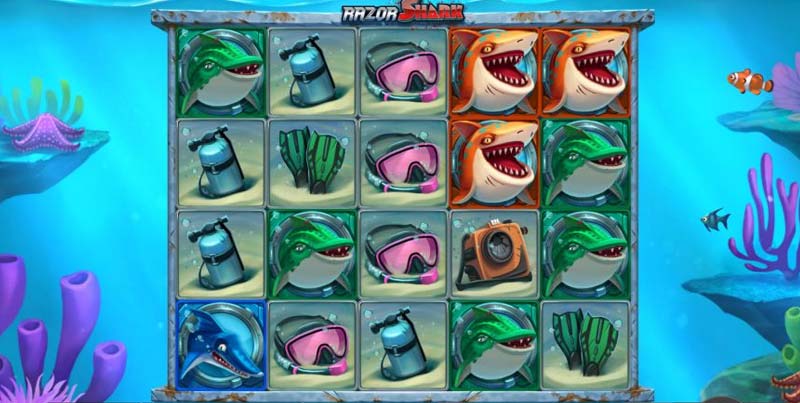 The game’s Wild symbol is the Great White Shark, while the orange sea mine acts as the game’s Scatter. It’s refreshing to see a slot that commits to fully to the theme, without resorting to playing card symbols or other elements not relevant to the concept. The design in Razor Shark is razor sharp and lays the foundation for a great casino experience.

The main objective in Razor Shark is to match between three and five symbols along of the game’s 20 paylines. The slot pays from left to right, starting with the leftmost reel. Throughout the base game you can trigger various bonus features, randomly or by landing certain combinations. In the following, we will delve further into these features.

One of the prominent features in Razor Shark is the slot’s Mystery Stacks.

The Mystery Stacks consist of four rows and will appear at random times in the game. When a stack like this fall on the reels it will trigger the Razor Reveal feature. The seaweed will then either transform into a paying symbol or a Golden Shark.

The Golden Shark symbols will then transform the symbols into mini-reels which will give players Instant Bet Multipliers and Scatter symbols. The bet multipliers can be anything between 1x your bet up to a whopping 2500x! All multipliers present on the reels will be added up and the end of the Razor Reveal feature.

If three or more Scatter symbols are revealed during this feature the Free Spins game is activated. More than three Scatters will give an enhanced Free Spins round.

When you activate the Free Spins round in Razor Shark, reel #2 and #4 will fill with Mystery Stacks. This will trigger the Nudge & Reveal feature will give the player even more win multipliers.

The great part of the Free Spins round in Razor Shark is that it comes with a win multiplier. And not just that, the multiplier increases for each winning spin. This multiplier continues throughout the entire Free Spins round, which carries on until there’s no more Mystery Stacks on the reels. The Free Spins round is entertaining, although it can seem a bit confusing at first glance. It is also potentially rewarding; you can win up to 2500x your stake in the round.

Razor Shark is a high-volatile online slot. This means that while you might have several spins in a row without any notable wins, the wins are likelier to be high when they land. This is exemplified by the Mystery Stacks feature—it might be a while between each time it activates, but when it does you should expect to land some nice wins.

It’s 2019, so this pretty much goes without saying, but: Razor Shark is beautifully developed for mobile gaming. Regardless of your device or operating system you will get a seamless casino experience on the go.

And with our added iFrame support to mobile it’s never been this easy to enjoy all the best games and features at Wildz Casino from your handheld device.

Razor Shark has long been one of the most popular slots at Wildz Casino. And frankly, we understand why. The animations are fresh, and the theme is well thought-out. The randomly activated Mystery Stacks add a level of excitement to the base game, and the Free Spins round is both entertaining and potentially rewarding.

Push Gaming keep showing why they are a force to be reckoned with in the years to come. They’re regularly delivering slots that find a broad audience.

Razor Shark, and other Push Gaming slots, are available to play at Wildz Casino. You will also find hundreds of other games and Live Casino offerings in our ever-growing library. Just sign up or log in to start playing at Wildz Casino.