Step into the colourful world of Jack Hammer, a hardboiled tough-as-nails detective. If you’re named after a powerful, electro-mechanical tool, you are bound to be badass.

Jack Hammer is a NetEnt slot with 5 reels, 3 rows and 25 paylines. What sets the game apart, however, is that all 15 symbols spin independently. This gives a total of 15 individually spinning reels in this slot. This, combined with a very popular bonus feature, has made the slot into a smash hit.

Jack Hammer draws inspiration from old school pulp magazines, or pulp fiction, of the early to mid-1900s. This was inexpensive, often considered simple, literature focusing on the sensational and exploitative.

These pulp magazines often followed heroic characters in their quest to take down the evil bad guys, and many consider the magazines to have evolved into what we know as modern superhero comics. This is the genre Jack Hammer draws it inspiration from. 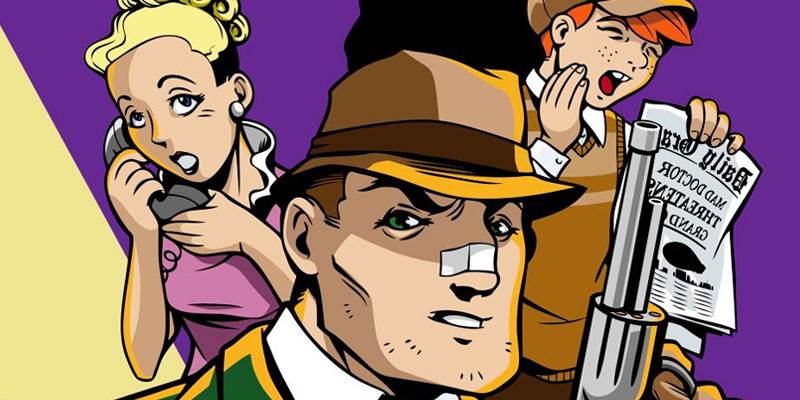 With a colourful and lively comic book-design, the slot follows the gritty detective Jack Hammer in his quest to take down the evil Dr. Wüten. Opening Jack Hammer is like stepping right into a comic book, where the city and characters come to life through big brushstrokes and great animation. The scene is set in Dark City, where Dr. Wüten’s blimp is seen on the horizon. The symbols are like frames out of a comic book: the low-value symbols consist of said blimp, a car in a car chase, a ringing telephone, a beaker full of poison and a newspaper mentioning the threat towards the Grand City.

The high-paying symbols consists of the title character Jack, the nemesis Dr. Wüten, a damsel in distress and a newspaper boy.

The great comic-book style animation is truly one of the highlights of Jack Hammer, and the design ranks among NetEnt’s finest over the last years. That’s no mean feat, considering the amount of high-quality designs the slot provider puts out.

Jack Hammer is not a complex slot. To land a win in the main game, you need to get 3 or more matching symbols along a payline. If this happens, the game’s ultra-popular Sticky Win feature is activated.

With the Sticky Win feature, all winning symbols will stay in their place while you receive a respin. If one or more matching symbols land on the respin, these symbols will lock in place before another respin is awarded. With a total of 10 symbols and 15 symbol positions, the chances are good of landing several of the same symbols. 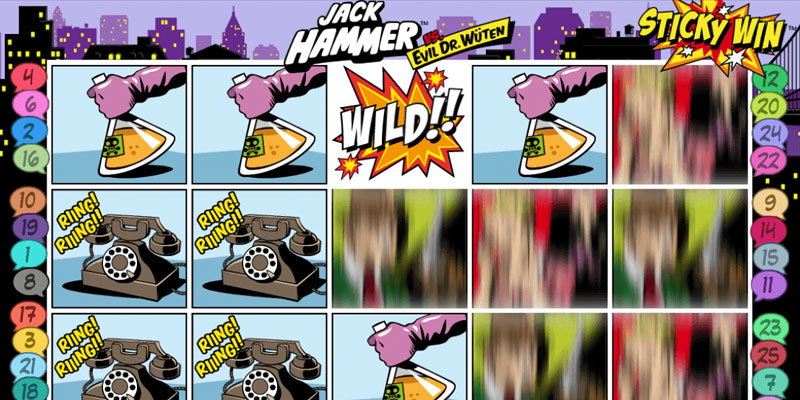 This rings especially true for the common low-value symbols. While they on their own might not represent too much value, their value increases quickly if you collect several on the reels at the same time. The Sticky Win feature is also beautifully animated, and the sequence where more and more symbols stick to the reels is surprisingly captivating.

In addition to the Sticky Win feature, Jack Hammer offers a Free Spins round. This bonus is activated by landing 5 or more of the Bomb Free Spins symbols. The number of Free Spins awarded depends on how many symbols activate the bonus:

All wins in the Jack Hammer Free Spins round is multiplied by 3x, and you can trigger more spins by landing 5 or more new Free Spins symbols on the reels at the same time.
The Sticky Win feature is also active during the Free Spins round, ensuring a very high win potential.

Jack Hammer is a classic example of a slot with low volatility. In this game you can expect small, but frequent wins. This is in large due to the Sticky Wins feature, where you regularly land wins, albeit not of the biggest size.

If you activate the Free Spins round you can expect some serious wins, but in the base game you are more likely to endure smaller and more frequent wins. This is probably part of the reason the slot has found such a large audience online. The frequency of the wins means the risk of losing big amounts decreases, and you can play longer on a small bankroll.

Jack Hammer was such a big hit that NetEnt made a sequel. In Jack Hammer 2, Jack is back with the same great graphics, game mechanics and Sticky Win feature. In the sequel you could also benefit from Random Wilds in the Free Spins round.

The Jack Hammer double-bill shows why NetEnt is widely regarded as the best slot provider.

You know what you get with NetEnt Touch games. You get the same amazing slot experience as you get on desktop, regardless of your device. As long as you have a modern device and an Internet connection, you can play Jack Hammer on the go.

The slot’s comic book design fits perfectly for a mobile game, and with the game controls readily available on the game screen this game is a blast on handheld devices.

We are normally not too concerned with graphics and design in a game. The most important thing, to us, is usually the gameplay or the bonus features. But we must admit, we thoroughly love the design of Jack Hammer. It genuinely feels like flicking through a comic book when the reels spin, and especially the characters faces are beautifully designed.

But a good design alone isn’t enough to make a game great, and Jack Hammer hasn’t become such a popular online slot just because its great design. It is largely due to the Sticky Win feature, which activates often and turns small wins into modest ones.

The Free Spins round is also solid, with a possibility of getting a whopping 30 Free Spins to begin with. Add in the 3x multiplier, the Sticky Win feature and the possibility to retrigger the bonus round, you have a great bonus feature on your hands.

Jack Hammer is among the most popular slots from NetEnt, which is no small feat considering how many popular games they have made. With a great combination of graphics and features, we have no problems understanding why the game is as popular as it is. Our rule of thumb is: if a slot gets a sequel, it’s usually very good.

Do you want to join the fight against the evil Dr. Wüten? Play Jack Hammer and hundreds of other online slots, and Live Casino games, at Wildz today.