Some online slots never seem to lose popularity. In fact, in some of the cases, it seems like the games increase in popularity over time. This includes titles like Starburst, the jackpot slot Mega Moolah and Gonzo’s Quest. These online slots have been mainstays on the list of most popular games ever since their releases. And that’s no mean feat, considering the amount of new, high-quality slots that are released every week. But another game belongs on this list: The Microgaming slot Immortal Romance. 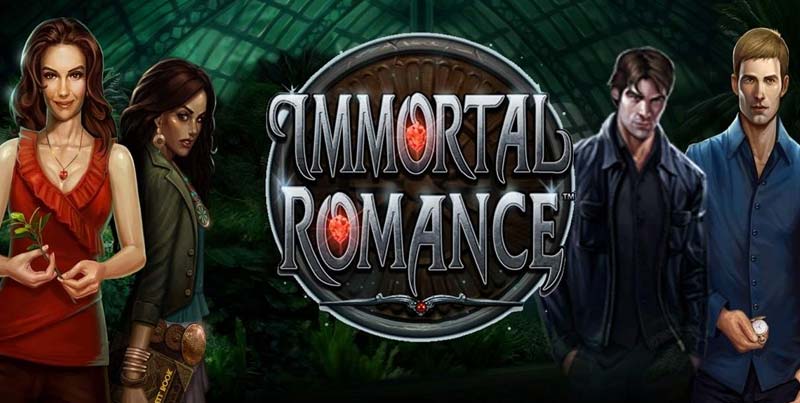 The popular game has been around since 2011, but it consistently ranks among the most popular slots at Wildz Casino. The game’s vampire theme is heavily influenced by the time it was made; this was the period when Twilight, Vampire Diaries and True Blood dominated pop culture. Now that’s not to say that you shouldn’t check out this slot if you haven’t. It is mainly known for its brilliant gameplay and bonus features, not (just) the supernatural vampire love story. Read on if you want to learn more about Immortal Romance and why it’s among the most popular slots at Wildz Casino.

The design in Immortal Romance heavily resembles the other popular vampire movies and shows from the same time. The colour scheme is dark, with hints of dark blue, grey and red. It fits well with the moody vampire style from early in this decade. The slot has 5 reels, 3 rows and 243 ways to win—a very classic online slot setup.

The game symbols consist of playing card symbols, ranging from 9 all the way through A. The slot also has four main character – the witch Amber, the vampires Michael and Troy, and Sarah, the doctor – and they are all represented as separate game symbols. Other symbols include an abandoned hospital and a symbol showing a glass of wine, a handwritten letter and candlelight.

If you have ever played the Thunderstruck II slot, you will recognise most of the gameplay in Immortal Romance. The objective of the slot is to match three or more symbols along one of the game’s 243 paylines. The game pays from left to right. 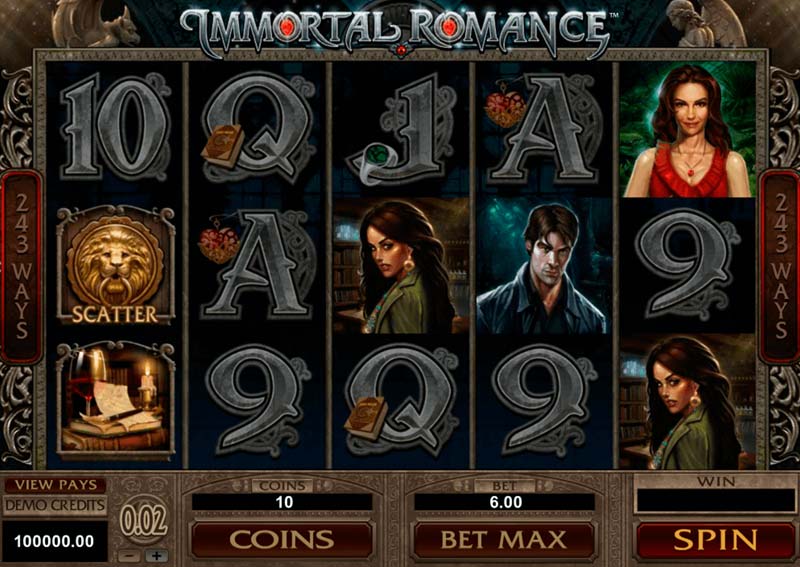 The symbols to keep an extra eye out for is the Immortal Romance logo, which is the slot’s Wild and substitutes for all symbols apart from the Golden Lion Door Knocker. The door knocker is the game’s Scatter symbol.

In the base game, there is a randomly activated feature called Wild Desire.

When the Wild Desire feature is randomly triggered, up to 5 reels will transform into Wild symbols. This will not trigger the Free Spins round, but it will potentially reward you with some big wins. And speaking of Free Spins… The bonus feature is what has cemented Immortal Romance’s place as one of the all-time favourite online slots.

Ah, the famous Chamber of Spins. The bonus feature that makes even the hardest anti-vampire person forget his hatred for paranormal love stories.

Even more lucrative is Troy, whom you will see between the 5th and 9th time you trigger the Chamber of Spins. Troy awards 15 free spins and a Vampire Bats feature. With this feature, symbols can turn into x2 or x3 up to x6 multipliers at random.

It’s heating up when we get to Michael. This 800-year old vampire can be lucrative, but you need to work to meet him: this bonus feature will trigger between the 10th and 14th time you activate the Chamber of Spins. In this feature, you will receive a solid 20 Free Spins. You will also get Rolling Reels, which has been known to give consecutive wins. That’s good news, as consecutive wins in this feature can give you a multiplier up to 5x.

The ultimate goal in the Chamber of Spins feature is to activate the Sarah bonus round. She will first and foremost award you with a whopping 25 Free Spins. 25! This bonus feature will also have a Wild Vine feature, where the Wild Vine symbol will randomly transform symbols to Wilds when it lands on reel 3. You obviously need to play for a period of time to trigger the latter stages of the Chamber of Spins, but the feature triggers relatively often. And, let’s be fair, the first level of the multi-level bonus feature is already pretty decent: 10 Free Spins with a 5x win multiplier holds its own against most Free Spins features in any online slot.

Immortal Romance is a slot with a medium to high volatility. This means that you won’t win as frequently as you do in, say, Starburst. But at the same time, you’re likely to win more often than in Dead or Alive, a highly volatile online slot. Playing Immortal Romance, you can expect a relatively steady stream of smaller wins, while you might have to wait a bit longer for the massive wins. These are particularly found in the Chamber of Spins feature, the game’s lucrative Free Spins Round.

The slot also has a theoretical RTP (return-to-player) of 96.86%, which is higher than average among online slots.

Perhaps surprisingly, Immortal Romance looks really well on most handheld devices. Microgaming has done a brilliant job in converting the slot to the smaller format. You will be able to enjoy this paranormal slot experience on most devices and operating systems.

Even as self-proclaimed vampire sceptics, we have a soft spot for Immortal Romance. The slot has been among the most popular casino games online for several years now. The vampire theme and music probably felt more fitting upon its release than it does now, but the slot still plays brilliantly.

As already mentioned, it’s the Chamber of Spins that steals the show here. The game doesn’t offer too much else in terms of features, but the Free Spins bonus is simply outstanding. It is particularly enjoyable and lucrative for the patient (and lucky) players that manage to unlock the later stages.

You can play Immortal Romance and several other paranormal online slots at Wildz Casino. Not your thing? Don’t worry, we have pretty much any genre and style you could think of in our library. Why don’t you come have a look? Just log in or sign up at Wildz.com today to start playing all the best online slots.