King Midas, famous from Greek mythology, had what you would call a gift and a curse. For those unfamiliar with the story about King Midas, he wished for (and got) the ability to turn everything he touched into gold.

While that sounds like a sure-fire way to become rich, problems quickly arose. Literally everything Midas touched turned to gold, which, unfortunately for him, turned out to be a problem for food and drinks. There are a lot of (conflicting) legends about King Midas, but the most widely accepted one is that he died from starvation as a direct result from his greediness. 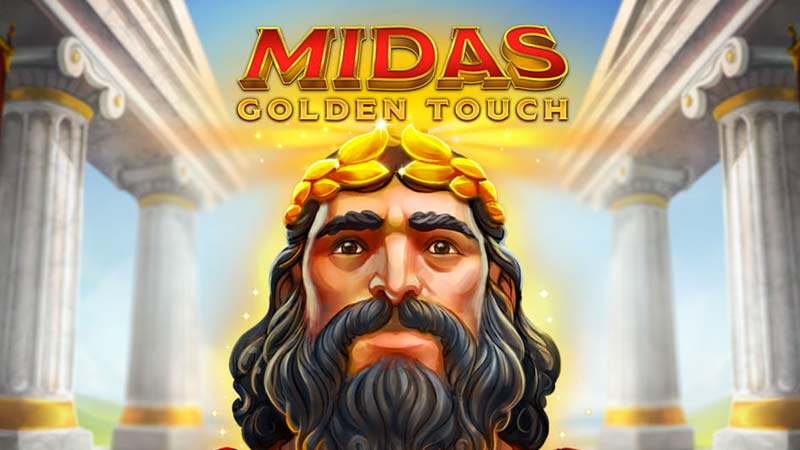 Ignoring the fatal outcome of the Midas legend, the story birthed the expression “Midas touch”, which refers to having a golden touch. Slot provider Thunderkick has taken the fun elements (gold, riches, excess) and ignored the bad (starvation, death) and created an entertaining slot. Read on to learn more about the game and how you can play Midas Golden Touch at Wildz Casino.

The stage is set inside a Greek outdoor structure flanked by massive columns. The marble floor is polished in front of what looks to be the entrance to Midas’ temple. The graphics are crisp, and the visuals of the slot are slick.

Midas: Golden Touch follows a classic setup with 5 reels, 3 rows and 15 fixed paylines. Playing card symbols, from 9 through A, make up the low-value symbols of the game. The higher-value symbols consist of a coin chest, a chalice, what looks to be a golden laurel and the man of the hour, King Midas himself.

The Wild symbol will substitute for all symbols except the Midas temple, which is the slot’s scatter symbol. The 3D animations of Midas Golden Touch are well-designed, but they frankly don’t stand out much from your average online slot. There is no extra eye-catching design features or animations.

The gameplay in Midas: Golden Touch is straightforward. The objective is to match between three and five symbols along a payline, starting from left to right. There is a total of 15 paylines, and depending on which symbols you land, five of a kind can give you 75x your stake.

If this sounds basic, it’s because it is. But Midas: Golden Touch has a trick up its sleeve: wild multipliers.

These wild multipliers add an extra level to the base game of Midas Golden Touch. But the game has its biggest strength in the Free Spins round. 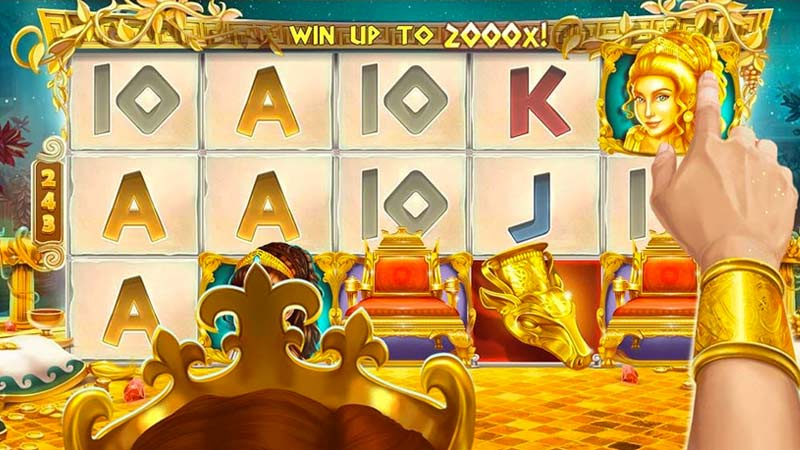 The Wild multiplier feature is still active in the Free Spins round. But that’s not the best part of the bonus feature. The best part is the fact that a random Wild symbol will be placed on the reels before each spin. This, in turn, will increase the chances of winning and triggering the Sticky Repins feature.

This means that winning combinations will get a gold (of course) background and lock in place for a free respin. If any new, matching symbols fall on the reels, they will stick in their position for yet another respin. This process continues until there are no new matching symbols on the reels.

These respins, in combination with the Wild multipliers, takes the total win potential of this slot to 10,100 your stake. In our opinion, that’s almost as good as turning something into gold by touching it. And you don’t run the risk of starvation, either. You can trigger more Free Spins by landing three or more Scatter symbols on the reels during the feature.

King Midas Golden Touch is a slot with high volatility. This means that you might endure prolonged periods with low returns. But then, in return, the wins can be significant when they first land. This is in large due to the wild multiplier feature. While you might go long periods without landing any, you can get your win multiplied by up to 32x when it all aligns.

The lucrative Free Spins also plays a part in making this a volatile slot. With Sticky Respins, Wild multipliers and a max win potential of 10,100x, we are frankly OK with risking a few spins without wins.

As most Thunderkick slots at Wildz Casino, Midas: Golden Touch is optimised for mobile play. You can enjoy the same slot experience on most modern devices and operating systems, and all the game controls are easily available when playing on mobile.

There are certain expectations associated with a name like Midas: Golden Touch. He was, after all, known for turning everything he touched into gold. And we feel that Thunderkick has turned this concept into gold. Or, almost, at least.

There’s not much missing in this slot, but we do miss one more base game feature. Maybe we’ve just become spoiled with feature-packed modern slots, but we’d love to have at least two active bonus features in this game.

That being said, we do love the Wild multiplier. The possibility of landing a 32x multiplier on a random spin (although unlikely) in the base game really has our attention. We also like that the feature carries over to the Free Spins round where you can use it in conjunction with the Sticky Respins.

At the end of the day, Midas: Golden touch is a high-quality slot where you can win big with some luck. The graphics are crisp, and the soundtrack is lively. Some more “life” on the screen would’ve been welcomed, but we return to the game for the big win potential, not for the animations.

You can play Midas Golden Touch and several of the best Thunderkick slots at Wildz Casino. In our ever-growing library, you will also find hundreds of other slot machines and Live Casino games, including our very own Wildz Blackjack table.