Ah, the far east. This fascinating, distant part of the world. Even in today’s connected world, where you can travel pretty much anywhere without selling a kidney, the eastern culture is somewhat exotic to us westerners. The far east has brought us alternative medicine, incredible food, different religions and manga. To mention a few things. And it is the manga culture that is at the centre of Moon Princess.

Play ‘n Go are inviting all players along on a journey to a colourful anime destination. It doesn’t matter if you know all your anime character or if you don’t even know what anime is. Moon Princess is a colourful video slot from Play ‘n Go with a 5x5 grid playing area, a lively design and a plethora of bonus features. Read on if you want to know more.

The colourful manga theme is ever-present all through this lot. The animations are colourful, and the design is cartoon-like and almost a bit childish. The slot’s three anime princesses – Love, Star and Storm – will take turns standing on the side of the grid. They look like they have come straight out of a Japanese manga series, with their short skirts and big, animated eyes. 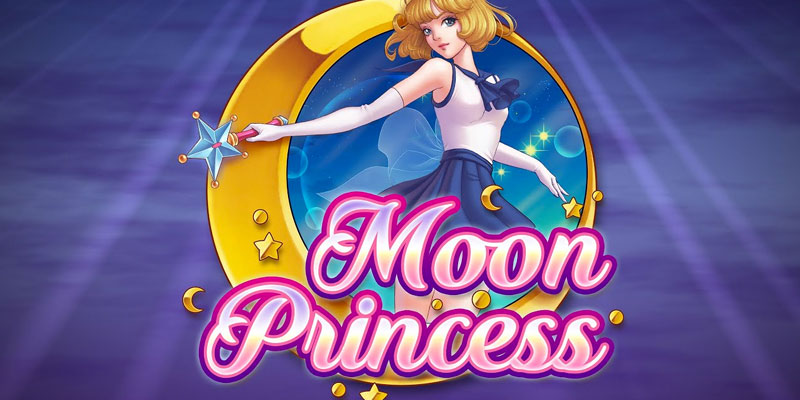 The colourful game symbols consist of a bell, heart, star and rainbow. The three princesses are also present, as the game’s most valuable symbols, while the moon represents the game’s Wild symbol. The background does not offer many details, but it does change colours as you play.

On the left side of the grid, there is a Charge Meter and a multiplier counter, instrumental to one of the features of this game. Under the playing area, you find all the game controls conveniently placed and in a cartoonish finish in line with the visuals of the slot.

Winning combinations in Moon Princess are made with 3 or more identical symbols connected horizontally or vertically. Combinations can only be made along these lines. For example, a 2x2 block of identical symbols would not be a winner nor are symbols aligned diagonally; a 3x3 block would win 6 different ways.

Moon Princess has Cascading Symbols, which means game symbols fall from above the grid. When a combination is made, those symbols vanish and are replaced by a Wild symbol. Winning combinations made with Wild symbols will also result in a Wild being generated. You continue to receive respins as long as combinations are being completed.

The multiplier increases each time symbols drop after others have been cleared. An area on the screen displays the completed combinations and current multiplier. When no further combinations are possible, the multiplier will reset for the following spin. 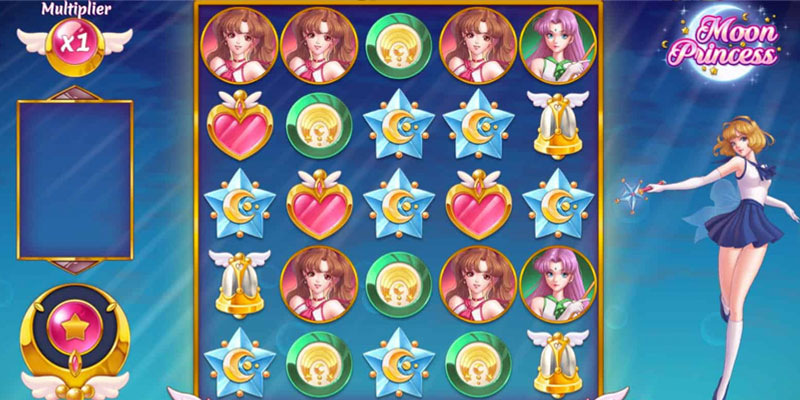 Moon Princess is all about #girlpower. During spins in the main game that do not produce a win, 1 of 3 Girl Power features can be triggered at random:

When the entire grid is cleared of symbols, not including Wilds, a Free Spins game will be triggered. The player can then choose from the following 3 Free Spins options:

Moon Princess is a slot with high volatility. Playing this game, you might endure long periods with limited returns, while chances are that you will win big once you hit a win. This is largely due to the lucrative Free Spins round, where you can win up to 20 free spins and get a 10x multiplier. If you are fine with spinning for a while waiting for a big win, Moon Princess is the slot for you.

Moon Princess almost looks like a mobile game, with its manga inspired design and bright colours. It’s no surprise that the game works excellently on handheld devices.

The game runs on all modern devices, as long as they support either iOS, Android, Linux or Windows. We feel confident saying all smartphones and tablets should be capable of running the game.

Ever since the release in 2017, Moon Princess has been one of the most popular Play ‘n Go slots. It is easy to see why, and the quirky and colourful design is paired brilliantly with some exciting bonus features. Even for non-manga lovers, this slot should provide a playful and enjoyable gaming experience.

We particularly enjoy that the player gets to choose between 3 different Free Spin features. It is nice to have a small say in what happens in the game, and such variation ensures the longevity of the slot. Although we would have liked to start with more free spins, we like the fact that you can retrigger more new spins. The multiplier applied to all wins is also a very nice touch.

The randomly triggered Girl Power features are also great for a little boost after a near-win spin. Combined with the Princess Trinity feature, it’s safe to say that Play n’ Go have packed Moon Princess full of enough features to keep players entertained for a very long time.

Want to play Moon Princess or hundreds of other online slots and Live Casino games? Just log on to Wildz.com (New player? Register here) and find the game in our library. You can try our slots for free before you wager your own money. Have fun!